The PC(USA) remembers the March on Washington

Calls for continued justice advocacy on behalf of the marginalized 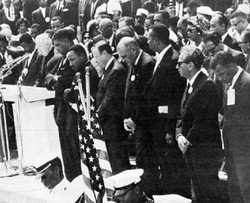 The Presbyterian Church (U.S.A.) celebrates the 50th anniversary of the March on Washington for Jobs and Justice. Our legacy as a denomination is grounded in the principles of biblical justice and the mission of Jesus Christ. Jesus Christ shared in his mission statement at the beginning of his ministry.


“The Spirit of the Lord is upon me, because he has anointed me to bring good news to the poor. He has sent me to proclaim release to the captives and recovery of sight to the blind, to let the oppressed go free, to proclaim the year of the Lord’s favor.” (Luke 4:18-19)


Our presence at the March on Washington in 1963 was both prominent and prophetic. Reverend Dr. Eugene Carson Blake, the Stated Clerk of one of our denomination’s predessesor bodies, The United Presbyterian Church in the United States of America (UPCUSA); was a principal speaker at the Lincoln Memorial on Wednesday, August 28, 1963. Dr. Blake represented the UPCUSA, now the Presbyterian Church (U.S.A.), and the Council of Religion and Race of the National Council of Churches in Christ. He served as the Council’s vice president. In his speech he said, “We do not, therefore, come to this Lincoln Memorial today in any arrogant spirit of moral or arrogant spiritual superiority to ‘set the nation straight’ or to judge or denounce the American people in whole or in part. Rather we come – late, late we come – in the reconciling and repentant Spirit in which the humble Lincoln of Illinois once replied to a delegation of morally arrogant churchmen, ‘never say God is on our side, rather pray that we may be found on God’s side.’”

Today, the Presbyterian Church (U.S.A.) identifies with the need to continue Jesus’ biblical calling of our faith – to be on God’s side - as we engage the struggle for jobs, justice and equal protection under the law for all citizens of the world. Both our justice and mission work around the globe are reminders of the dismal realities that many persons face in these difficult times. Hunger; joblessness; racism; gun violence; greed; homelessness; unemployment; voter suppression; wars; religious persecution and a host other unjust categories that make life difficult are pervasive throughout the world. These difficulties are symptomatic of our failure as a global community to combine God-given wisdom with undaunted courage in an effort to build a world community committed to justice for all people. As Dr. King reminded us we must be about the work of establishing a livable wage, eradicating war and rebuilding both the spiritual and economic infrastructure that provides hope and opportunity for all people now, and for generations to come.

We join the President and our other brothers and sisters in Washington, D.C. this week in celebration or the 50th anniversary of the March on Washington. However, we are aware that we cannot tarry in this or any other commemoration for too long. The world needs to feel the presence of Jesus Christ through active participation in justice advocacy on behalf of the marginalized. It is then that those persons who know longsuffering too well will join us in declaring that we are one nation, under God, indivisible with liberty and justice for all.