Join Us for a National Conference Call on the Trans-Pacific Partnership February 3rd! 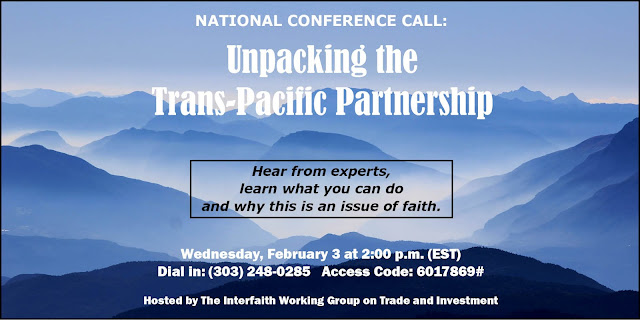 As people of faith coming from unique traditions, we work towards economic policies that place the dignity and worth of God’s people and all creation at its center. As world leaders gather on February 3rd to sign the Trans-Pacific Partnership trade agreement, we ask whether the agreement measures up to what Pope Francis calls an “economy of inclusion.”

The Interfaith Working Group on Trade and Investment invites you to join us for a National Call to Action on the TPP.  We will discuss the agreement’s implication for the environment, for rural communities living on the margins, and for patients seeking affordable access to medications. Hear from experts in these three areas, learn about what you can do, and why this is an issue of faith.

Posted by Office of Public Witness PC(USA) at 1:56 PM

Member of United Workers to Speak at CPJ Training Day

We are pleased to announce that a member of United Workers will be speaking at Compassion Peace and Justice Training Day April 15.

"Doreen Hicks has been working since she was nine years old, and has been a leader with United Workers, a human rights organization based in Baltimore, since 2008. She first met UW working as a temp at the Camden Yards stadium, which had recently won a struggle to guarantee the workers there a living wage. Doreen has been elected to the UW Leadership Council, worked as a Summer Organizer in 2010, and is an active part of the Working Matters coalition for Paid Sick Leave."

Stay tuned for more information on speakers and workshops!

Go to the link below to find out more about United Workers:
http://www.unitedworkers.org
Posted by Office of Public Witness PC(USA) at 7:07 PM

Posted by Office of Public Witness PC(USA) at 10:23 AM

Washington, D.C.–The Office of Public Witness applauds the Senate Agriculture Committee’s passage of the Improving Child Nutrition Integrity and Access Act of 2016. This bipartisan bill would reauthorize expired child nutrition programs.
The Improving Child Nutrition Integrity and Access Act of 2016 would streamline summer and after-school meal programs to make it easier to serve meals to kids year-round. The bill allows some states to provide summer EBT (electronic benefit transfer) cards to families in hard-to-reach areas to purchase groceries. It also allows some states to use alternative methods of reaching kids when they are unable to make it to meal sites.
Importantly, the bill does not make cuts to SNAP (formerly known as food stamps) or other anti-poverty programs to pay for these changes. One in five children in the U.S. lives at risk of hunger. For every six low-income children who receive a school lunch, only about half also get a school breakfast. Only one also gets a meal during the summer months.
Stay tuned for information about how to push your Senators to bring this important bill to the floor for a vote.
Posted by Office of Public Witness PC(USA) at 2:39 PM

The scriptures remind us of God’s desire for abundant living: “The thief comes to steal, kill and destroy; I came that they may have life, and have it abundantly." (John 10:10). Abundant living is difficult to achieve in a society where headlines are driven by the slogan “If it bleeds, it leads.” In 2010, the 219th General Assembly of the Presbyterian Church (U.S.A.) approved a policy statement calling for a reduction in  gun violence entitled “Gun Violence and Gospel Values: Mobilizing in Response toGod’s Call".  Since then, the PCUSA Office of Public Witness has vigorously advocated for Congress to act.  But, consistently, in congressional office after congressional office we have been met with statements about the American people’s opposition to any type of gun legislation. Ironically, when I visit many of these same congressional districts, constituents consistently ask, “What is your office doing about gun violence?” I concluded long ago that inaction on this issue is representative of a lack of courage. 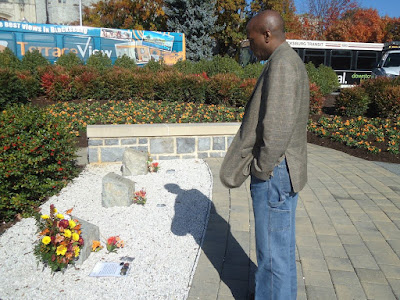 Last night, President Obama demonstrated that abundant living is grounded in a feeling of being safe and secure and that in order to live abundantly we must have the courage to implement its requirements. The President signed an executive order implementing common sense gun laws. His executive order includes:

·      Keeping guns out of the wrong hands by requiring that anyone in the business of selling firearms have a license and run background checks on all purchasers of weapons (this includes online purchases)
·      Making background checks more efficient and bringing an outdated background system into the 21st century
·      Getting more ATF personnel trained, hired, and equipped to investigate and assist with reducing gun violence
·      Offering additional assistance for people with mental illness so that they can get the help that they need (The vast majority gun deaths are a result of suicide)
·      Boosting new technology (smart technology) to improve gun safety

President Obama’s executive actions will likely be challenged in the courts.  But, I am deeply impressed with his courage to stand up for the requirements of abundant living, even at the risk of being misunderstood or maligned.  I pray that we will witness the same courage in state and local communities.  May this bring new energy to constituents who are willing to speak truth in love to power and continue to press for laws to reduce gun violence in the United States - 50,000 gun violence incidents and 312 mass killings in 2015 alone.

The Presbyterian Church (U.S.A.) Office of Public Witness will continue its support of measures to reduce gun violence in the United States. More importantly, we will continue to lift up the prophetic vision of witnessing peace abound – a day when men, women, boys and girls will engage in abundant living and not kill one another anymore.
Posted by Office of Public Witness PC(USA) at 1:42 PM