Celebrate the Birthday of the Minimum Wage: Send a Letter to the Editor!

“Before those days there were no wages... But now I will not deal with the remnant of this people as in the former days, says the LORD of hosts. For there shall be a sowing of peace.”
Zechariah 8:10-12

This Friday, we sing a joyous ‘Happy 76th Birthday’ to the U.S. federal minimum wage! As we [1]
celebrate how God has blessed us through the fulfillment of vocation and the dignity of work, we also know that many people labor in jobs that do not pay a just wage. The federal minimum wage for the 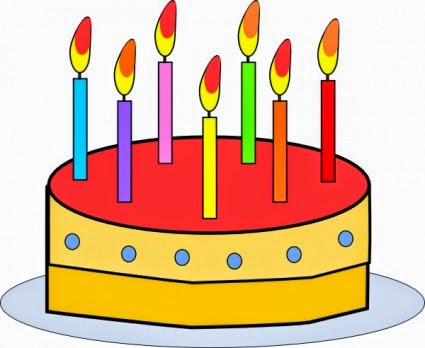 past 76 years has been instrumental in providing a wage floor, a guide to help employers treat workers fairly and offer a just wage. But even as we celebrate the minimum wage’s birthday, we also pray for a raise in the wage to $10.10 per hour. The current minimum wage of $7.25 per hour traps workers and their families in cycles of poverty. As Christians, we are compelled to advocate for justice for the lowest-earners in our society and raising the wage would lift just under one million people out of poverty.

Will you send a letter to the editor of your local paper asking Congress to raise the wage?

At the beginning of the Great Depression, there was no minimum wage. Just like today, the disparity between the rich and poor had grown in the Roaring 20’s.  The Fair Labor Standards Act of 1938
established the minimum wage not only to mitigate this injustice, but also to spur economic growth by increasing low wage-earners’ purchasing power. The minimum wage was first set at 25 cents an hour, to be raised to 40 cents the following year.

Many of the arguments against the institution of a minimum wage are still being used today. In the Congressional debate on the Fair Labor Standards Act, Rep. John McClellan of Arkansas inquired what difference a minimum wage law would make “if [a worker] then lose the opportunity to work.” Similarly today, many of our legislators oppose a raise in the wage, saying it would kill jobs.

McClellan’s concerns fell flat. After the institution of the minimum wage, along with other social programs of the New Deal, unemployment decreased from 19% in 1938 to 1.2% in 1944. It helped bring the nation out of the Great Depression. 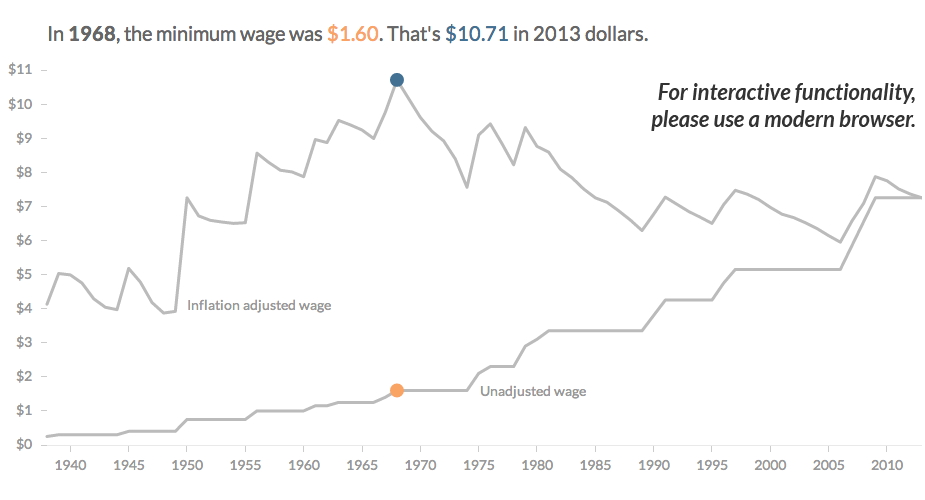 Be a voice in your community for raising the wage!

We have found much hope in state legislative efforts to raise the wage. States that raised their minimum wage in 2014 saw faster job growth than those that didn’t. [2] Moreover, raising the wage would allow 1.7 million Americans to transition off of government assistance programs. [3]
As God has blessed us with work and vocation, let us rejoice in the dignity of all those who labor. We celebrate the great gains that the worker has made with the help of the minimum wage over the past 76 years and we pray for a raise in the federal minimum wage to $10.10. It would be a great blessing of justice and peace to workers, to our government’s budget, to businesses, and to our economy as a whole.
Many thanks to Rev. Brian Adams for the original piece on which this blog is based.

[1] Congressional Budget Office. The Effect of a Minimum-Wage Increase on Employment and Income. http://www.cbo.gov/publication/44995. 18 Feb, 2014.

Join us for a webinar: Pentagon Budget 101

Just How Big is the Pentagon Budget?

Join us for a webinar!

As we wind down from over a decade of war, Pentagon spending should come down. U.S. Pentagon spending is excessive and starves other vital programs and contributes to the militarization of our foreign and domestic policy. This year’s Census data revealed that in 2013, roughly one out of five children in the U.S. lived in poverty. Just a reminder that though the U.S. leads the world in military strength, it is desperately lacking in other capacities. As members of the faith community, our engagement with policy is rooted in spiritual conviction. In seeking a world that is free from war and the threat of war we must examine its true costs.

Please join us for this important discussion.

Briefing with International Peacemakers from South Sudan and Malawi

Please join us for a

Briefing with International Peacemakers from South Sudan and Malawi

REV. JAMES KOUNG NINREW DONG
Rev. James Ninrew currently serves as the Liaison Officer for the Presbyterian Church of South Sudan (PCoSS) in Juba. He is a human rights activist, especially in the areas of the environment and extractive industries. He is a founding member and sits on the board of directors of the Nuer Peace Council (NPC), is chairperson of the South Sudan Action Network on Small Arm (SSANSA), is executive director of Assistance Mission for Africa (AMA), and is a founding member of the South Sudanese Network for Democracy and Election (SSuNDE). He has been a minister with the Presbyterian Church of South Sudan for 19 years. James speaks English, Arabic and Nuer and is married with 7 children, 3 boys and 4 girls.

MR. MOSES MAKANDWIRE
Moses Makandwire is currently based in Malawi and works as a Director for Church and Society -CCAP Synod of Livingstonia.  He has vast experience in election monitoring and observation in the SADC Region. He has observed elections in DR Congo, Southern Sudan, Mozambique, South Africa, Zimbabwe and Tanzania.  He has also assisted in designing and implementing election projects in his country around 1999, 2004 and 2009 and for the forthcoming 2014 Tripartite elections.  He has written and presented papers on issues of good governance, peace and conflict areas, human rights and democracy.  He is completing his second Masters in Political Geography at the University of Malawi’s Chancellor College.  He also holds numerous postgraduate certificates and Diplomas in Human Rights, Project Management, Election and Peace and Conflict Studies.  He has held positions at International and national levels as a Chairperson for the SADC Civil Rights Network, SADC Election Support Network, Malawi Election Support Network (MESN), National Integrity Platform-Malawi and Civic and Political Space Platform.  He has servd as a Special Law Commissioner for Review of the Republican Constitution in Malawi between 2005 and 2007 and as a Negotiating team member for the Civil Society-Malawi Government Dialogue team during the post 20 July 2011 demonstrations.  He is married with three children.
Posted by Office of Public Witness PC(USA) at 3:30 PM

The 2014 Midterm elections on November 4 are just one month away! Are you registered to vote? You can still register to vote in 25 states. What is your plan-- are you voting early or voting on election day? Are you encouraging your friends, neighbors, and members of your church to vote? If you are outside of the state in which you are registered to vote, make sure to request an absentee ballot in time (this is different for every state). For those who aren’t eligible to vote, use your voice to encourage other people to vote! Voting is both one of our fundamental rights as citizens and is a vital way we speak to the values of the kingdom of God in the political realm.

Click here to take a pledge to vote today. 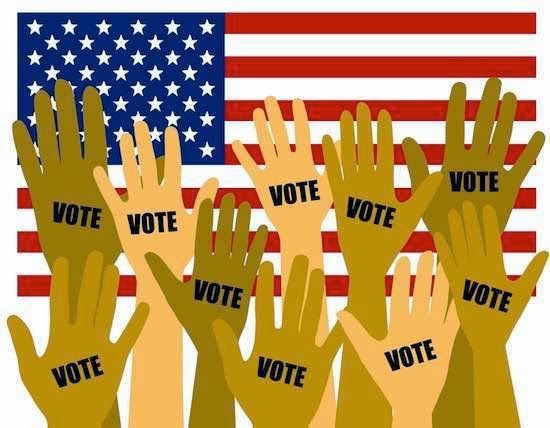 As a member of a congregation, how is your congregation getting out the vote? You might assume churches can’t be involved in elections because of their non-partisan 501(c)(3) status, but there are many ways that you can. Here are some do’s and don’ts of congregation and clergy involvement in political action.

Presbyterians have long expressed the importance of Christian participation in public life, and by extension the democratic process. The Confession of 1967 laid out the reasons the body of Christ should be involved in the reconciliation of society, saying, “In each time and place there are particular problems and crises through which God calls the church to act.” [3] By voting, we choose the leaders who then act for the reconciliation of society to which we are called.

The 200th General Assembly of the Presbyterian Church (U.S.A.) adopted a policy statement called “God Alone is Lord of the Conscience” that affirms the importance of religious community participation in public life. “According to the Reformed tradition…faith demands engagement in the secular order and involvement in the political realm.” [4]

Midterm elections are an especially crucial time to get out the vote. Americans with the most extreme political views on both sides tend to vote in midterm elections. We must exercise our rights and speak with our voices of faith to who we want to be as a nation this election season.

Check out The United Church of Christ’s “Our Faith, Our Vote” resource.

May we leverage our collective voices of faith to promote the common good in our nation and around the world. We’ll see you at the polls!


[1] “Do’s and Don’ts” are compiled from resources provided by the United Church of Christ “Our Faith, Our Vote:” http://www.ucc.org/ourfaithourvote/ and NETWORK Nuns on the Bus “I am a Voter” campaign: http://www.networklobby.org/bus2014/vote. Please note: the Presbyterian Office of Public Witness cannot provide legal advice on these matters. Direct all questions to qualified legal counsel.

[2] In “Lift Every Voice: Democracy, Voting Rights, and Electoral Reform” published by ACSWP with ACREC in 2008, the 218th General Assembly of the PC(USA) voiced concern for obstacles to voter participation and affirmed voting early, easing absentee ballot restrictions, and making election day a national holiday as ways to insure “equality and fairness in the process.”