A Resource by the Office of Immigration Issues

Many times the General Assembly of the Presbyterian Church (U.S.A.) has voiced concern about the need for change in our nation’s immigration policy. The General Assembly has called for changes that will meet the needs of our country and our families. The need for reform is rooted in our rediscovery of ourselves as the church of the stranger, the biblical mandate to welcome and love immigrants, and the need to alleviate the suffering created by an unjust system.

In November 2012 eight Senators, four democrats and four republicans, began work on comprehensive immigration reform to modernize our nation’s immigration policy. Known as “The Gang of 8,” the Senators introduced legislation in April 2013, Border Security, Economic Opportunity, and Immigration Modernization Act (S.B. 744), and that legislation has gone through an amendment process in the Senate Judiciary Committee. It will be debated in the full Senate in June 2013.

Below is an outline of major provisions of the legislation and how it fits in with General Assembly policy.

A pathway to citizenship for people already working and living in the U.S.
The DREAM Act

Even though the legislation is in-line with the General Assembly policy, overall, there are some changes needed. The office of Immigration Issues will work in partnership with our interfaith partners to improve the legislation.


SB 744 will head to the full Senate for debate in June 2013. Presbyterians are urged to contact their Senators and encourage them to support comprehensive immigration reform that has a pathway to citizenship, eliminates back logs, provides a commonsense plan for future flow, avoids the militarization of our southern border, and provides for humane enforcement.

The General Assembly of the Presbyterian Church (U.S.A.) has affirmed the right of congregations, presbyteries, and the denomination as a whole, to speak out clearly and constantly to the media and others regarding our call to serve all those in need and to stand with the oppressed. (217th General Assembly 2006). If you have questions about how to share your faith in the public square, please see the resources below.
For more detailed analysis, please explore the resources below:

Posted by Office of Public Witness PC(USA) at 1:20 PM

From our partners at the National Council of Churches:

Bristol Bay, Alaska is home to the world's largest wild sockeye salmon fishery, which has supported the subsistence livelihoods of the Bay’s Native Alaskans for thousands of years. This stunning piece of Creation is now under threat from a proposed open pit mine that would destroy the salmon habitat and cause irreversible damage to God’s Earth and God’s people. 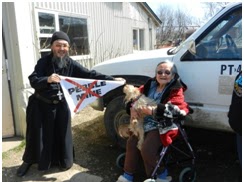 Add your voice to the call for permanent protection of Bristol Bay.

The Environmental Protection Agency (EPA) recently issued their Bristol Bay Watershed Assessment, which describes the damage that large scale development such as the proposed Pebble Mine could pose to the Bay’s clean waters, fish, wildlife, and people. Click here to read the NCC’s press release in support of the Watershed Assessment.

We stand with the Native Alaskans and commercial fisherman who depend on the health of Bristol Bay’s fishery, and ask the EPA to use the Clean Water Act to protect Bristol Bay from the irreparable harm the proposed mine would cause God’s people and Creation in and around the Bay. Click here to send your message to the EPA asking them to permanently protect the world’s largest wild sockeye salmon fishery, 14,000 American jobs, and a Native way of living that is thousands of years old.

Thanks to Katherine Carscallen for the photo of Father Yako from Chignik Lake.

Posted by Office of Public Witness PC(USA) at 5:03 PM

Before Senators go on break for the Memorial Day recess, immigrant families and faith leaders visited key Senators’ offices to deliver collections of photos and personal stories of how families have been separated and affected by our immigration system. This comes after Tuesday’s bipartisan vote of 13-5 in the Senate Judiciary Committee to pass the Senate’s immigration bill unto the full Senate floor. During the almost two weeks of mark-up, the Senate Judiciary Committee considered more than 200 amendments. Now, the bill will be sent to the full floor for more debate and a final vote. The collection of personal stories were delivered as a way to keep Senators connected to some of the families that will be directly impacted by their decisions and to remind them that immigration reform is necessary.

During the amendment process, the interfaith community made more than 3,000 calls to the Senate Judiciary Committee members. Our voices made a big difference in gaining modest improvements to the bill and in defeating some of the worst amendments. Positive amendments that were won will help immigrants in detention by restricting the use of solitary confinement, Violence Against Women Act recipients and children. They will also prohibit dangerous deportations, discourage racial profiling and will restrict immigration enforcement actions near schools, hospitals, victims’ services locations and places of worship. Individuals will also be allowed to pay fines in installments thus somewhat lessening the burden of the high penalties and fees required for legalization. 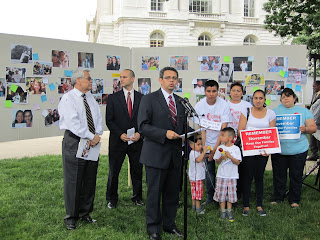 Starting next week, Senators will be at home for a short recess. When the bill is introduced to the full Senate floor in early June, Senators will have an opportunity to introduce new amendments. We need to be ready and willing to continue to powerfully advocate for laws that reflect our values and the PC (U.S.A)'s General Assembly priorities. We are all children of God, members of one people and we must love and welcome each other and strive to live in peace, in justice, and in love. If you’d like to visit with your Senators and Representative during their recess to speak to them about immigration reform check out the resources provided by the Interfaith Immigration Coalition for ideas on how to do so.

Posted by Office of Public Witness PC(USA) at 3:27 PM