Our Call to Prophetic Witness - A Letter from the Stated Clerk

The Stated Clerk sent this letter to all Presbyteries:
________ 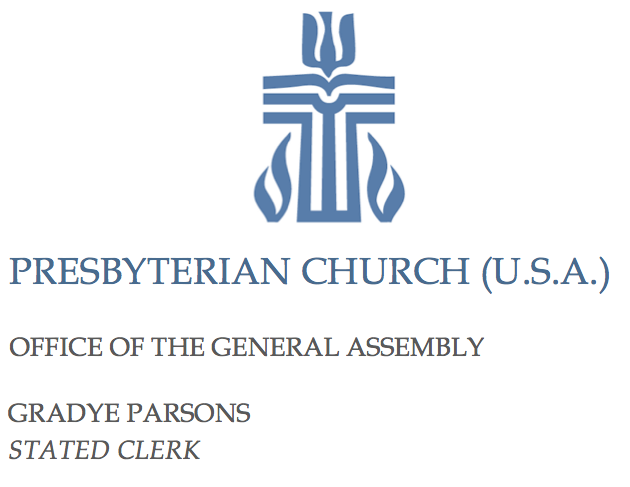 Grace and peace to you in the name of our Lord and Savior Jesus Christ.

As Presbyterians we have a rich history of seeking justice. Scripture instructs us in Deuteronomy 16:20, “Justice, and only justice, you shall pursue.” A section of our Brief Statement of Faith reads, “We trust in Jesus Christ, fully human, fully God. Jesus proclaimed the reign of God: preaching good news to the poor and release to the captives, teaching by word and deed and blessing the children, healing the sick and binding up the broken hearted” (Book of Confessions, 10.2, Lines 7–15).

As the Stated Clerk of the General Assembly, I am writing at the direction of the 220th General Assembly (2012) to “recognize with joy and thanks to God the historic stance of the Presbyterian Church (U.S.A.) in pursuit of justice as a central mandate of our church, a mandate that calls us to uphold the need to be faithfully partisan in situations of injustice and to speak truth to power, wherever necessary as we pursue justice, without fear of retribution or the delay of deflection.”

In Presbyterians and Politics: Disturbers of Government, I recalled the first General Assembly in 1789, where commissioners engaged with government by approving a letter to be written to President George Washington expressing delight in his appointment to the “first office in the nation.” I also wrote,

On one hand, it would appear that those of the Reformed tradition have been defenders of the role of government, and on the other hand, disturbers of governments. Presbyterians have argued with the government about many issues, such as slavery, education, temperance, labor conditions, segregation, war, and the environment. At times, the General Assembly has spoken for the vast majority of the church, and at other times, the assembly has spoken a prophetic word to itself and the world.
Today we continue our rich tradition of engagement in the public sphere. It is a great joy to here recognize how our Presbyterian and Christian call to justice is being lived out in the lives of individual Presbyterians, local congregations, mid councils, and our national church. There are numerous examples of justice work being done and I highlight three here:

I have written before and I am repeating the sentiment now. Let us be encouraged today as we prepare for our upcoming General Assembly. May we understand this as a time to provide opportunity for us as a denomination to pursue justice together, to hear our collective call, and to respond with obedience, “to disturb governments, to speak truth to power, and to engage in the political context of the age.” Let us understand that “we—ministers, teachers, nurses, plumbers, all of us—serve God in and through our vocation and are called to a ministry of witness wherever we are.”

The Reverend Gradye Parsons
Stated Clerk of the General Assembly

Posted by Office of Public Witness PC(USA) at 4:49 PM