Brown v. Board at 60 by J. Herbert Nelson

Reflection on the 60th Anniversary of the
Supreme Court Decision
Brown v. Board of Education
By Rev. J. Herbert Nelson, II

“In these days, it is doubtful that any child may reasonably be expected to succeed in life if he is denied the opportunities of an education.  Such an opportunity, where the state has undertaken to provide it, is a right that must be made available on equal terms.”
-  Chief Justice Earl Warren, Brown v. Board of Education (1954) 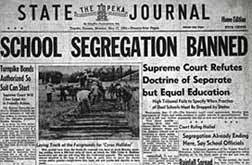 Today, May 17, 2014, is the 60th anniversary of the Supreme Court decision that ended legalized racial segregation in United States public schools. Brown v. Board of Education (Topeka, Kansas) overturned an 1896 case known as Plessy v. Ferguson, which ratified the “separate but equal” doctrine that allowed that, as long as the separate facilities for the separate races were equal, segregation did not violate the Fourteenth Amendment to the Constitution.

The Fourteenth Amendment provided for equal protection under the law for all citizens. Brown v. Board was a landmark decision whose lead defender was then-NAACP lawyer Thurgood Marshall. The case is the cornerstone in the Civil Rights Movement’s use of the legal system and the Supreme Court to overturn racial segregation in public education. Furthermore, thirteen years later in 1967 when President Lyndon B. Johnson nominated Thurgood Marshall to serve as the nation’s first African-American Supreme Court Justice, it signaled a new hope for the United States. Marshall was confirmed and served on the Supreme Court for twenty-four years. This was a hopeful beginning towards a new course in race relations in the United States. 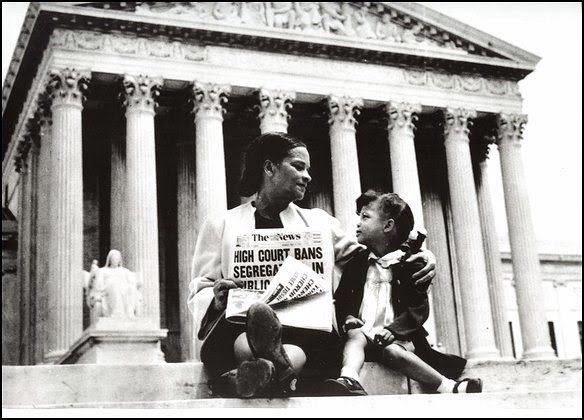 When I was a child, I participated as a student in racially segregated education in the 1970’s. We were urged by caring teachers to focus on our assignments through classroom discipline, challenging academic lessons, and reminders that we represented more than ourselves. Entering the workforce as a productive citizen was the expected end result of a good education. Our families expressed their need for us to achieve and reminded us that believing in God and ourselves was important to developing resilience in tough times. Learning was not segmented. Faith, social skills, and discipline were integrated teachings at home, school, and community life.

The struggle to end segregation in public education was believed by some to be a part of our communal calling to expand opportunity for all. Justice was deeply involved in this communal calling, because education was preached as the roadmap to opportunity in this nation and world. My father often preached that integration was an opportunity to engage the whole community in collective learning. His view was based on the belief that all races could learn from one another, because we all had something to offer. “God is no respecter of persons”[i] he bellowed from the pulpit of St. Luke Presbyterian Church in Orangeburg, South Carolina. And indeed we know that God shows no partiality, but endows each child of God with unique and special gifts. Integration challenged our community and I applaud those Caucasian parents who did not move their children to the all-Caucasian private schools. It was an act of trust beyond their own making that led them to commit to desegregation, knowing that a high school that was then all-Caucasian would become predominantly African American just a few years after integration.

So, the celebration of this landmark decision is momentous, both for me personally and for our nation.  But we still have a problem.

Today, public education is failing in the United States. Inner city public schools are emblematic of the devastation in the inner city. High rates of poverty, gun violence, HIV/AIDS, teen pregnancy, suicide, drug use, alienation, and despair plague these inner city schools. Large populations of poor African American and Latino children are the “forgotten children” educationally in the United States – the ones we left (and continue to leave) behind. We are faced with private and charter schools that are competing with and drawing public funds away from a failing public education system. 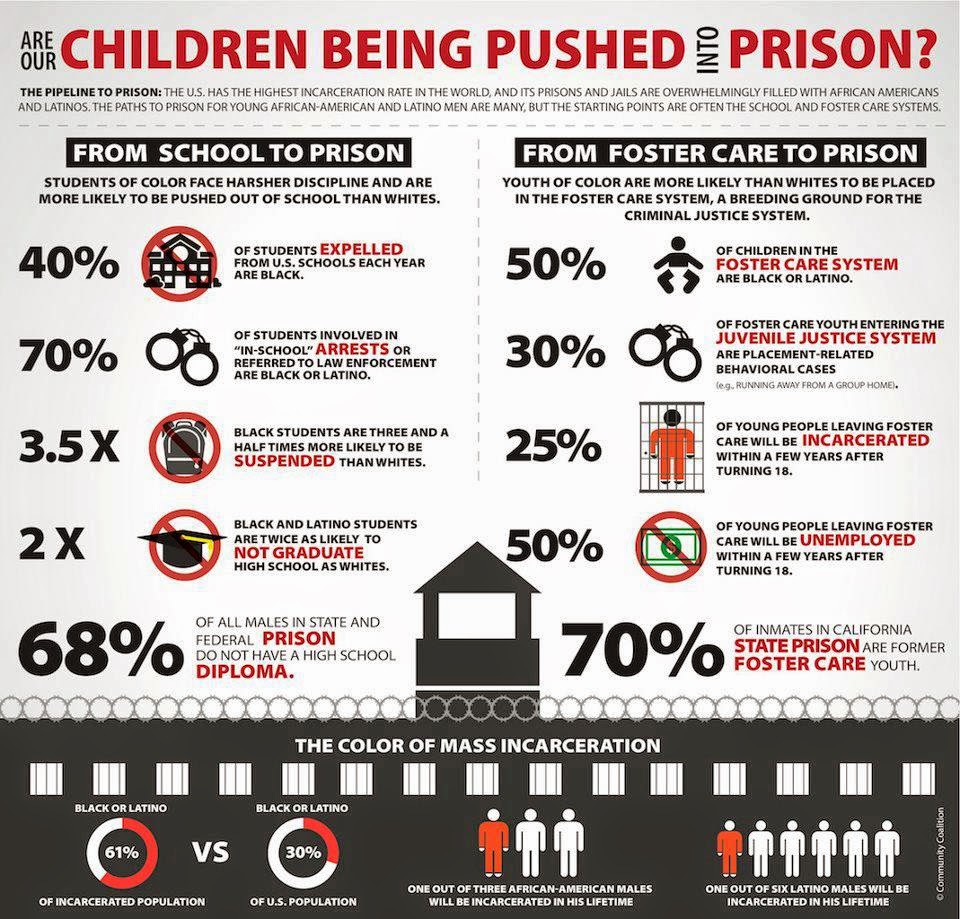 Poorly educated children entering a dismal job market are a recipe for hopelessness, despair, and desperation. We are witnessing the results in the school to prison pipeline, which is not being addressed in any significant way by our local, state, or federal government. In this common scenario, privatized, for-profit prisons become a destination for masses of young people who are trapped in the penal system with long-term incarceration and damaged lives. An underground economy of drugs, prostitution, and other illegal activities, fed by guns and other forms of violence, becomes the despairing result of a hopeless people.[ii]

What About Our Tradition?

The 219th General Assembly (2010) of the Presbyterian Church (U.S.A.) adopted the resolution “Loving Our Neighbors: Equity and Quality in Public Education.” The policy is both a reminder and challenge to restore our historic commitment to the education of the whole child – each and every child. In the Rationale for this extensive document, it explains with respect to our Reformed heritage: 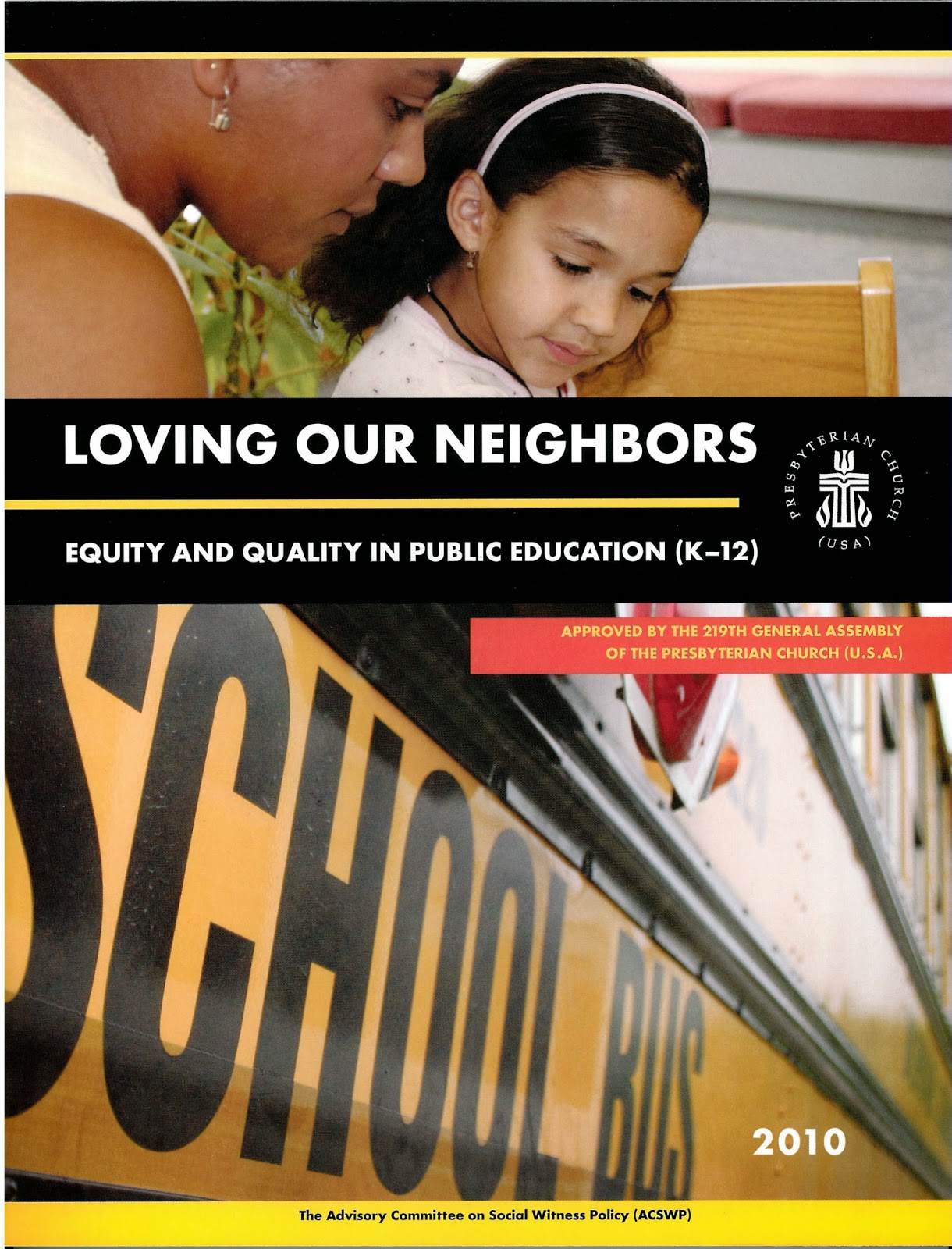 Beginning with John Calvin’s support of free schools, people of the Reformed tradition have always affirmed the value of education and its potential to transform lives and systems. The Reformers considered public education essential—first of all, so that the populace might be literate and thus able to read the Bible (leading to support for primary education); and, Secondly, that persons might read Scripture with understanding (and thus the reformers’ support for higher education). Our Reformed tradition further asserts that “... privatism, which seeks exemption from the conditions prevailing in a society and refuses to participate in a creative way in the social milieu, is incompatible with God’s intention for our lives. [Our tradition] affirms that growth toward self-determining, responsible, committed persons, concerned for the freedom and stability of their society, is best fostered in the pluralistic and ideologically open setting of public education. This role of the public schools must be consistently maintained and openly defended when necessary by citizens and by school personnel” (A Call to Church Involvement in the Renewal of Public Education. (Minutes, 1987, Part I, p. 481).[iii]

Historically, Presbyterians have offered strong support for public schools to educate children. But in this present day, we cannot ignore the failures of public education and the educational disparity between wealthy and poor children in the United States. Brown v. Board of Education was an acknowledgement of the racial and economic disparity that existed in a time of Jim Crow segregation in the United States and its resulting psychological damage. How can we celebrate when poor minority children in our own country are no better off today, with regards to receiving a quality education, than they were sixty years ago? I want to suggest that we missed the mark. The intention of Thurgood Marshall and others who fought against “separate but equal” was not simply for African American children to occupy the same classroom with Caucasian children. Integration was a means to provide a significant learning experience that would shape a future of hope for all children. Today, we are failing miserably.

Perhaps the most famous biblical account involving children is found in Mark 10:13-16 and it is about breaking down barriers for children. In the story, Jesus becomes displeased with his disciples after they rebuke the people for bringing children and try to send them away. These children were brought to Jesus to be blessed by him. Jesus expresses his displeasure with his disciples and tells them, “let the little children come to me; do not stop them; for it is to such as these that the kingdom of God belongs.” He affirms them and bases our future acquaintance with the Kingdom God on an acknowledgement of our child-likeness before the throne of grace. Bring them to me is Jesus’ clarion call to children who are shoved away and ignored. Today, we continue to be called to stand up and intervene for the children. We must challenge a system that remains racially segregated when it comes to opportunity for the least of these, including our children. We can and must do better.

I encourage you to study the policy adopted by the 219th General Assembly (2010) entitled “Loving Our Neighbors: Equity and Quality in Public Education.”

Other ideas for engagement:

·   Solicit others in your congregation, church school class, and community groups to investigate the possible disparities in education in your own cities, towns, and/or communities.

·       Revisit the history of Brown v. Board of Education and the subsequent cases for which it paved the way. Brown opened the door for several important cases that all chipped away at the long-institutionalized “separate but equal” disparity.

·         Attend local school board meetings, learn more about the inequities in education, and seek to make your own schools a place of equity and opportunity for all children.

·    Support the work of the Presbyterian Church (U.S.A.) Office of Public Witness in Washington DC, through upcoming action alerts, contacting your Congressional leaders and the President, financial giving opportunities, and information sharing, as we work on federal reform of public education in the United States.

The Reverend J. Herbert Nelson, II, is the Director for Public Witness at the Presbyterian Church (U.S.A.) Office of Public Witness in Washington, DC.

[i] “God is no respecter of persons,” Acts 10:34, King James Version. A more contemporary translation from the New Revised Standard Version reads, “God shows no partiality.”

Posted by Office of Public Witness PC(USA) at 12:00 AM