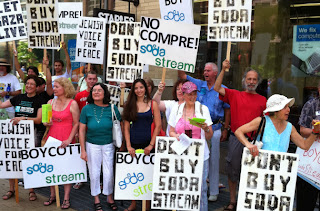 At its July 2012 meeting, the General Assembly of the Presbyterian Church (U.S.A.) spent considerable time discussing actions that it could take to help further the peace process between Israel and Palestine. After much study, discussion, and prayer regarding the prospect for peace between Israel and Palestine, the 2012 General Assembly passed a resolution that called for the boycott of all Israeli products coming from the occupied Palestinian Territories. It also directed the Stated Clerk to communicate this action to all other PC(USA) councils and entities and invite and strongly encourage those groups and organizations to endorse this boycott until significant progress toward Palestinian rights and independence can be reported to the General Assembly or Presbyterian Mission Agency. What can you do to join the Boycott? 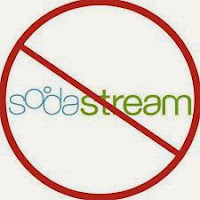 Join the Interfaith Boycott of Sodastream!


SodaStream’s main production site is in Mishor Edomim, an Israeli settlement industrial park located in the West Bank. The land where the SodaStream factory is located was illegally confiscated from its Palestinian owners by the Israeli military occupation authorities. Israeli settlements are an impediment to peace and violate international law.   For more info go to http://sodastreamboycott.org/

Have your church or Presbytery sign the Pledge to Pray, Study, and Act to Support the Presbyterian Church (USA) Boycott of Settlement Products

Respect for the dignity of every human being, alongside a vision to put aside the violence of  terrorism, oppression, and military force is key to moving negotiations forward for a lasting peace for all involved. We are all the children of Abraham, let us no longer profit at the expense of the safety and security of one another. Instead let us end the violent cycle and build a circle of peace.

We, members of the [Presbyterian Church], [Presbytery] pledge to Pray, Study, and Act in support of the right to freedom for all peoples from discrimination, oppression and occupation.

Please let us know if you, your church, or your presbytery choose to join the boycott! Contact catherine.gordon@pcusa.org.
Posted by Office of Public Witness PC(USA) at 1:46 PM