Rev. Hawkins Responds to Exit from the Paris Climate Accords 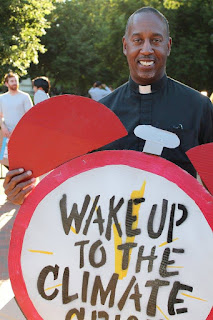 Remarks as prepared for climate rally in front of the White House 6.2.17

The Bible begins, “In the beginning, God created the heaves and the earth…” Christians are called to care for the earth and its inhabitants, including the sea, birds, and “every creeping thing that creeps on the earth.” The environment, the world, the stars, the moon and the sun, everything that is was created by God and given to human beings to care for and to protect. We are called to be stewards of God’s creation, not abusers of it.

On Thursday June 1, 2017 at 3:30 President Trump announced that the United States would withdraw from the Paris Climate Accord agreed to on Dec. 12, 2015.This decision on his part will do tremendous damage to this planet. It will not create jobs, rather slow tremendous job growth already occurring in clean energy production. The United States economy has benefited greatly from the decision to adopt green energy sources and cut down on emissions in order to limit the rise of global temperatures. The threat of climate change is "urgent and potentially irreversible," and can only be addressed through "the widest possible cooperation by all countries" and "deep reductions in global emissions." This agreement gives direction and needed momentum to the movement for Christian stewardship of creation.

Unfortunately the United States is not fully equipped with leaders who are ready to lead in climate justice. Far too many voices are speaking for God who, quite frankly, don’t understand theologically what Christian stewardship means. Many of our politicians have adopted a uninform theology which denies the reality of climate change.

·      Rep. Tim Walberg (R-MI) preached last Friday at a town hall “Well, as a Christian, I believe that there is a creator in God who is much bigger than us, and I’m confident that, if there’s a real problem, he can take care of it.”

·      In 2011, North Carolina Republican Rep. Virginia Foxx  complained that environmentalists “think that we, human beings, have more impact on the climate and the world than God does.”

·      And in 2013, GOP Texas Rep. Joe Barton said, “I would point out if you’re a believer in the Bible, one would have to say the Great Flood is an example of climate change, and that certainly wasn’t because mankind overdeveloped hydrocarbon energy.”

But I urge you, rather than listen to politicians who are way out their lane when talking theology, listen to those who have an informed faith, who are in conversation with the 97% of climate scientists who agree that warming trends over the last decades are due to human influence. 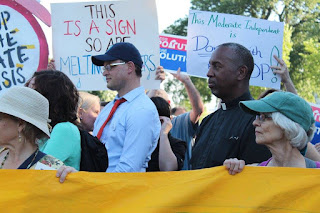 ·      Listen to the Presbyterian Church which has for decades been an advocate for protecting the earth, eliminating the use of fossil fuels and warning about the dangers of climate change. Read The Power to Change the climate justice policy approved by the 218th General Assembly which outlines our role and responsibility to act on climate.
·      Listen to the more than 80 groups and 3,600 individuals of Jewish, Buddhist, Hindu, Christian, and Muslim faith who have signed on a declaration against climate change including the Dalai Lama, the head of the World Council of Churches and several Catholic cardinals. Listen to the  majorities of American people of faith who say that dealing with climate change now will help prevent future economic problems: 82% of Jewish Americans; 76% of black Protestants, and 69% of Hispanic Catholics 1.8 million people have signed faith-based petitions calling for climate action.
·      Listen to Pope Francis who has explicitly presented global warming as a moral issue. He issued a 184-page papal letter titled “Laudato Si” (“Praise Be to You”) describing global warming as a worldwide problem rooted in greed, apathy and unceasing environmental exploitation. Pope Francis wrote that the poor and powerless are paying the heaviest price for those behaviors and that climate change “represents one of the principal challenges facing humanity in our day. The earth, our home, is beginning to look more and more like an immense pile of filth… Any harm done to the environment, therefore, is harm done to humanity.”

What we say as a church and what we do makes a difference. We can influence others who are hesitant to support the science which informs us of the current danger. EPA Administrator Gina McCarthy said the Pope’s encyclical on climate change was a “game changer.” According to a report from the Yale Program on Climate Change Communication, 17%  of Americans say the Pope’s stance on global warming has shaped their view of the issue.