Prepared Remarks by Rev. Hawkins for the #DefendClimate Rally 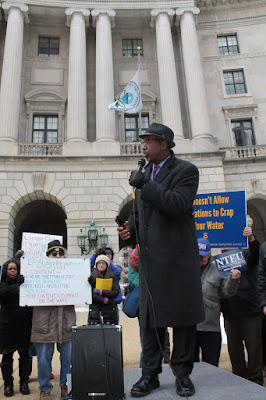 With our Lord Christ Jesus, we stand with the ‘least of these’ and advocate for the poor and oppressed in present and future generations who are often the victims of environmental injustice and least able to mitigate the impact of global warming that has fallen disproportionately on them.

As citizens of the U.S., which has historically produced more greenhouse gases than any other country, and which is currently responsible for over a fifth of the world’s annual emissions, we implore our nation to accept its moral responsibility to address global warming.

By drastically limiting the Environmental Protection Agency’s ability to protect public health and enforce environmental safety standards, this administration’s actions are no less than an attempt to gut the Clean Air Act.  The Clean Air Act is a landmark public health and environmental protection law that has drastically reduced dangerous, toxic pollutants in our air, land and water, and protected Americans for more than four decades.

The current administration has signaled its intent to eliminate EPA protections against dangerous pollutants like smog, mercury, arsenic and methane and limits on carbon pollution from power plants. All of these standards are authorized under the federal Clean Air Act.

We oppose these reckless attacks on clean air as if our lives depended on it, because they do. Because of immoral decisions to harm our air quality, our communities will conduct thousands of funerals for preventable premature deaths. It will cause dramatic harm to the health of children, especially those already suffering with illnesses such as asthma. This is tragic, it is wrong, and we will not accept it. 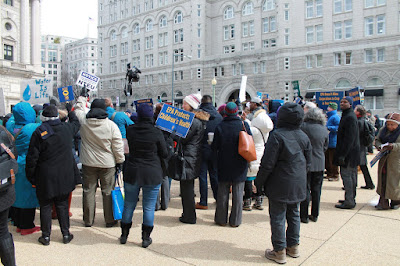 As people of faith, we are called to hold the powerful to account. We still do not know the full extent of Scott Pruitt’s ties to corporate polluters. The American people deserve to know the full truth. We know that as a Baptist, Scott Pruitt, shares a faith tradition that calls us to responsible stewardship of God’s creation and Mr. Pruitt himself has publicly stated his intention to protect clean air and clean water. However, we need him to earn our trust. His track record of suing the EPA, and his public refusal to recuse himself from ongoing cases he brought against the EPA, are deeply troubling. And his statement last week to CNBC denying that carbon dioxide emissions are a primary cause of global warming is extremely troubling. He said, “I think that measuring with precision human activity on the climate is something very challenging to do and there’s tremendous disagreement about the degree of impact, so no, I would not agree that it’s a primary contributor to the global warming that we see.” This is a dangerous belief which is out of touch with environmental scientists who are signaling just the opposite. It is our prayer that we have an Environmental Protection Agency head who actually believes in science and protects the environment. We are watching him closely, and we will hold him to account if he harms clean air and clean water.

Our President has claimed he will protect clean water, yet in his short time in office, he has not only gutted a rule to protect streams from coal mining waste, he has also used his executive authority to gut protections for wetlands and drinking water sources for more than 117 million Americans.

The Clean Water Rule is critical -- polluting or destroying a water resource can obviously harm other water users, fish, and wildlife, indeed all of God’s good creation. Polluting activities need to be minimized to ensure that downstream neighbors are not harmed by upstream polluters. Too often, it is low income communities and communities of color who bear the brunt of harm caused by major polluters while seeing few of the benefits of industry. The faith community and the Presbyterian Church (U.S.A.) in particular take a firm stand against environmental racism that would be wrought by a rollback in clean water protections. We call upon this administration to fortify and strengthen the EPA and the Clean Air Act, not diminish their power and influence.

A report approved by the 218th General Assembly of the Presbyterian Church (U.S.A.) titled The Power to Change: U.S. Energy Policy And Global Warming states emphatically that we have both a spiritual and moral responsibility to address the issues related to global warming. In order to do this we believe that repentance is required. Repentance in our biblical understanding calls humanity and nations to stop the actions that are contrary to God’s desires for the sustainability of human life, while turning to a new way of living that promotes life more abundantly. God can give us the power to change. 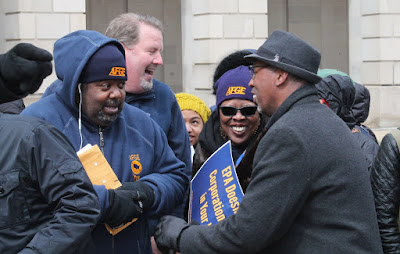 Posted by Office of Public Witness PC(USA) at 1:50 PM