We stand here today on the historic steps of the New York Avenue Presbyterian Church, a   In fact, this church has just voted to become a Sanctuary congregation. 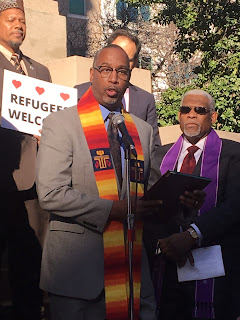 church where both President Lincoln and President Eisenhower attended services– and a church with deep roots in working for justice and peace in our country and abroad.

People of faith have provided safe space and “sanctuary” in their places of worship throughout history.  In ancient times, the Hebrew people had cities of refuge for persons wrongfully accused of crimes. In the years before the American Civil War, congregations provided safety for slaves fleeing the South in the Underground Railroad. In the 1980s, more than 500 U.S. congregations provided safe houses to Central Americans fleeing civil war but whom our government refused to acknowledge as refugees.

Knowing that Jesus himself entered this world as a refugee, faithful Presbyterians have been urging the welcome of refugees and demanding higher annual admissions into the United States since the refugee crisis of World War II.

The Presbyterian Church is present in many of the countries from which refugees and asylum seekers are fleeing.  This includes Syria and Lebanon, where we have been present since 1823. Because we have a presence with people of faith and communities in these countries, we understand why these refugees are fleeing and are further committed to welcoming them. 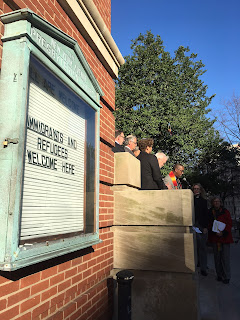 Thousands of Presbyterians across the U.S. have personally reached out to welcome refugees and asylum seekers.  They have seen first hand the struggles and the determination of our new neighbors to rebuild their lives in dignity.  We have also seen how difficult it is to focus on survival while worrying about family members who are still overseas waiting for the chance to be reunited. We know that family separation impacts family members on both sides of the ocean as those who are here must divide their attention and their resources between establishing themselves here and helping their loved ones stay safe.

Right now nearly 60 million people are displaced by war and persecution; 30 million of those displaced are children.  Eleven million displaced Syrians cannot go to school, tend to their land, or raise their children in the place they know as home. Families are risking their lives and fleeing their homes to seek safety. They are spending months journeying, sleeping outside, paying smugglers for safe passage, and praying for a future for their families in a place that is safe from conflict.  Our nation has historically stood for hope and welcome for those fleeing war and persecution. We cannot turn our back on them now.

Now is the time for the faith community and our nation to assist the refugees and asylum seekers who are the most vulnerable population on our planet.   We cannot let the noise of a fearful few drown out compassion and our firmly held collective values.

We stand with the American people in strong opposition to the announcement by the president, which turns our backs on Syrian refugees and refugees from around the world at the very time when they are most in need of safety.

The refugee resettlement program was started by faith communities in the United States and this announcement flies in the face of our values as a church and as a nation.  We are called to welcome the stranger and treat the sojourner as we would our own citizens.  Our nation will be judged by how we treat the most vulnerable: the widow, the orphan, and the refugee, during these trying times.

Rather than follow our most base instincts of fear and hatred, we must send a message of hope and healing, of peace and justice to those fleeing desperate situations.

Posted by Office of Public Witness PC(USA) at 4:02 PM