Congress to Balance Budget on the Backs of the Poor 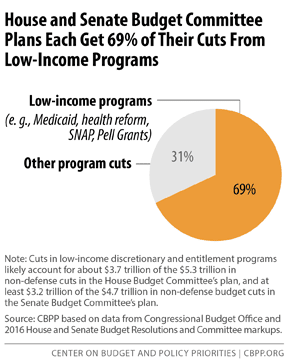 Senate Budget Committee Chairman Mike Enzi’s new plan proposes to balance the budget in ten years through massive cuts in domestic programs, with no revenue contribution over that time. The Center on Budget and Policy Priorities estimates that the Senate Budget plan and the House Budget Committee plan will get 69 percent of their cuts from programs that benefit low and moderate income people.

The Stated Clerk of the General Assembly, when discussing priorities in the federal budget, wrote “we know that we are responsible to each other and, as the Gospel of Luke teaches us, ‘from everyone to whom much has been given, much will be required.’  We, therefore, urge a solution to the…. federal deficit that ensures long-term fiscal stability; deficit reduction; just, new revenue; long-term integrity for entitlement programs; and a priority on the most vulnerable in society[1].”

The published budgets would slash essential funding and weaken the federal safety net at a time when many families have yet to fully recover from The Great Recession. Here is a closer look at what gets cut and what programs are safe:

Posted by Office of Public Witness PC(USA) at 9:59 AM